The Shadow of Her Smile 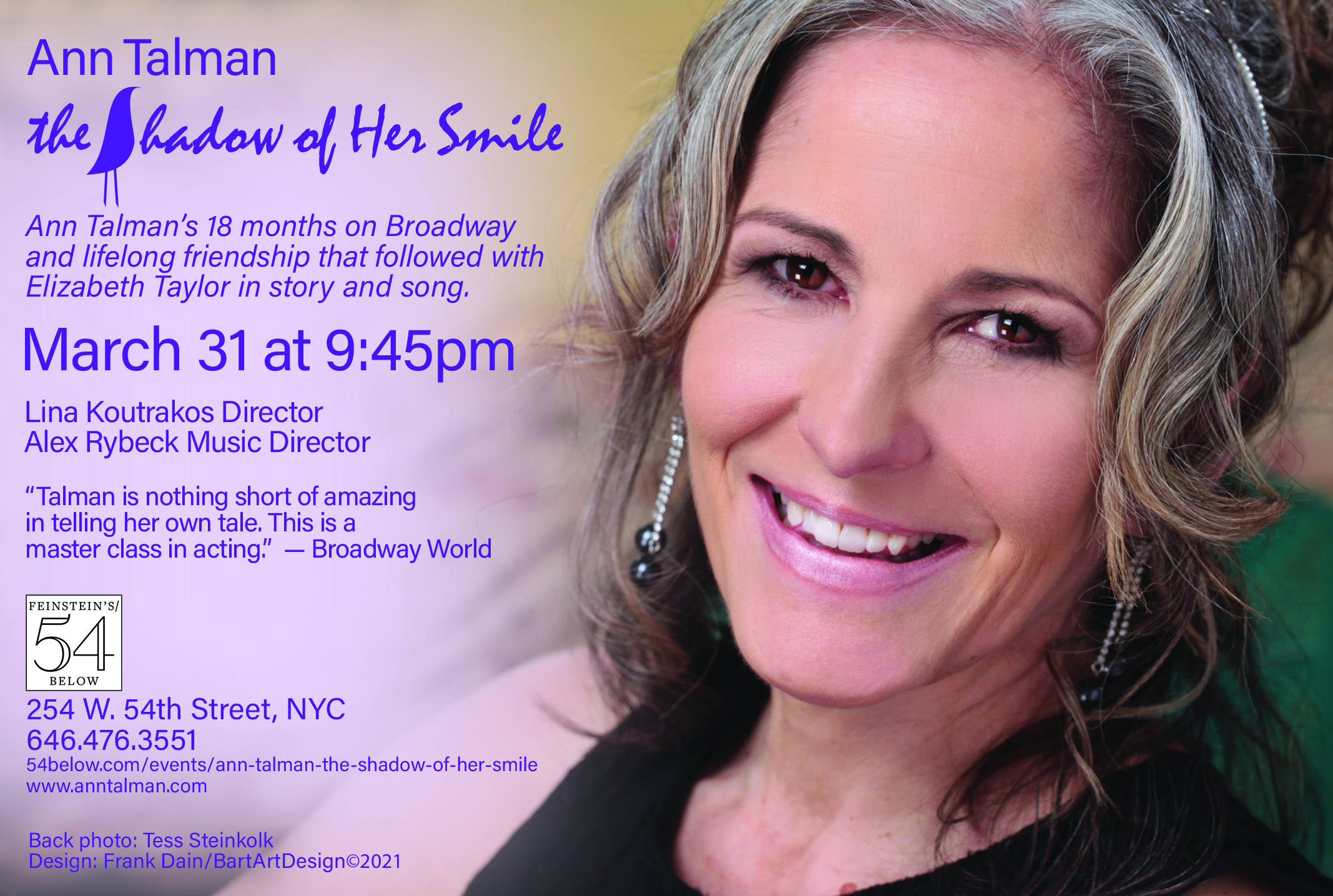 “Talman is nothing short of amazing in telling her own tale. This is a master class in acting.” –Broadway World
ANN TALMAN
“THE SHADOW OF HER SMILE”
A SPECIAL FRIENDSHIP IN STORY AND SONG MUSICAL DIRECTOR ALEX RYBECK DIRECTED BY LINA KOUTRAKOS
ONE NIGHT ONLY! THURSDAY, MARCH 31, 2022 @ 9:45PM
AT FEINSTEIN’S/54 BELOW, BROADWAY’S SUPPER CLUB 254 WEST 54th STREET – NYC
www.54Below.com

New York, NY – (2/3/22) FEINSTEIN’S/54 BELOW, Broadway’s Supper Club, presents Ann Talman in “The Shadow of Her Smile” for one night only – Thursday, March 31, 2022 @ 9:45pm.
Ann Talman is an actor, singer, storyteller, award winning documentary filmmaker, and four-time Broadway veteran. This is her Feinstein’s/54 Below debut. She joined Actors’ Equity with co-star Elizabeth Taylor in 1981 when she landed the plum role in The Little Foxes playing Taylor’s daughter on Broadway. The show traveled the world for eighteen months and their loving friendship lasted for the rest of Miss Taylor’s life. Ann’s new cabaret show, The Shadow of Her Smile, is directed by Bistro and MAC Award winners Lina Koutrakos with musical direction by Alex Rybeck, also a Feinstein’s /54 Below favorite.
The show is an evening of story and song about Ann and Elizabeth’s amazing bond. It is filled with hilarious and touching stories that only Ann can tell, woven with Broadway and Great American Songbook gems. Ann’s imitation of Elizabeth is so spot on, if you close your eyes, you’ll swear they’re together again!
Ann Talman: The Shadow of Her Smile plays Feinstein’s/54Below (254 West 54th Street) on Thursday, March 31 @ 9:45pm. There is a $35-$45 cover charge ($55 VIP and $75 Premium) and a $25 food and beverage minimum. Tickets and information are available at www.54Below.com. Tickets on the day of performance after 4:00 are only available by calling (646) 476-3551.