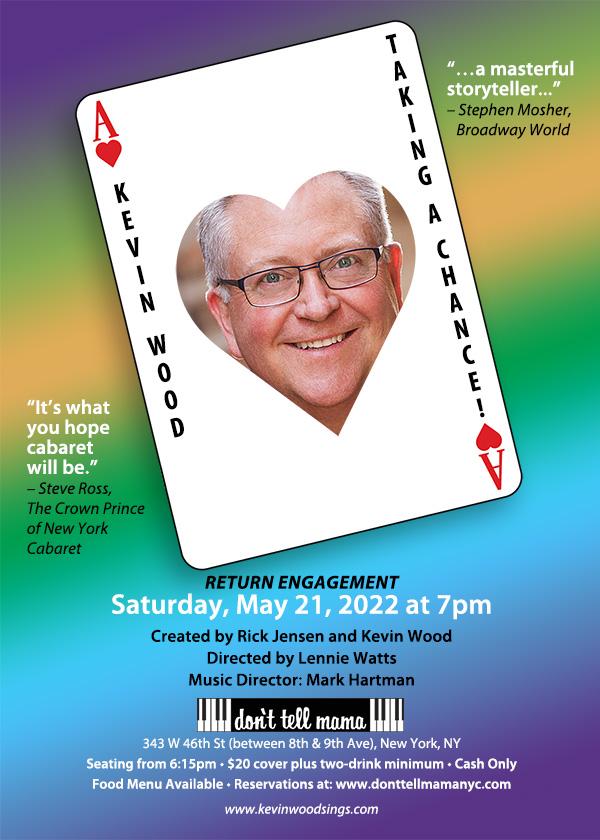 Kevin performs nationally. Most recently he has appeared in Palm Springs, CA where he debuted his new show,”Older But…..Not Much Wiser.” He also appears in Chicago at The Skokie Theater, Victory Gardens Theatre, Davenport’s, The Old Town School of Folk Music, Le Piano and Stage 773. Past NYC appearances include The Duplex as well as multiple appearances at DTM. His popular shows include “Sentimental Journeys – A Cabaret Staycation,” and “I Was Here…..and I’m Back!” In addition to performing, Kevin has also produced and directed many concerts in the Chicagoland area featuring cabaret’s finest talents.

Kevin first performed “Taking A Chance” at Don’t Tell Mama in September, 2019. He returned post-Covid in November of 2021 and returns May 21, 2022. Kevin takes the audience on a journey as you explore some of the chances we take in like – in love work, friendships, retirement, life in general – and more!

This show is directed by Lennie Watts and was originally co-created with director/arranger, Rick Jensen. For this performance, Mark Hartman joins Kevin from the keyboard.

You are invited to take a chance and join them for a hour of diverse musical styles and entertaining stories.