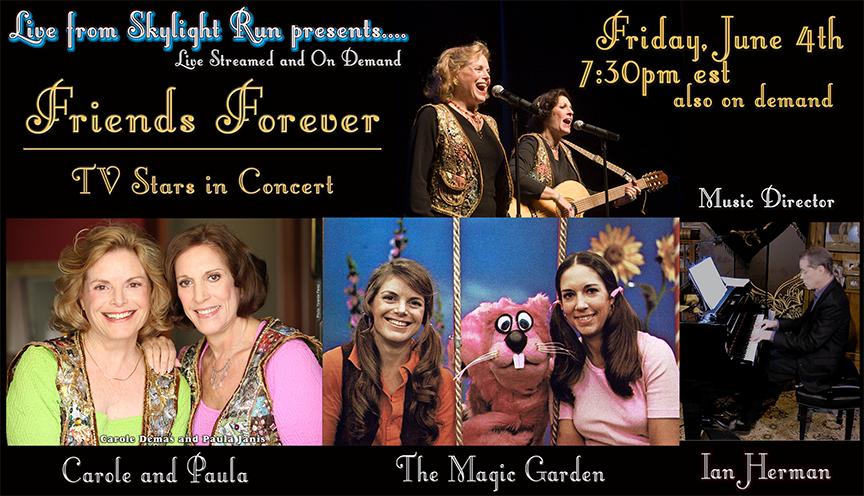 Carole & Paula, of TV’s THE MAGIC GARDEN in a livestream concert to celebrate their 67 years of friendship!  Friday, June 4th!!  7:30 PM EST. on demand anytime after,  yes anytime!

Live from Skylight Run presents Carole Demas, joined by her MAGIC GARDEN Co-Star – Paula Janis for a delightful concert. Songs, stories, solos and duets throughout the concert, sure to please all fans new and old alike.  Friends for 67 years, on and off stage, Carole and Paula are celebrating their friendship in concert.  Join them for a fun filled evening.

Carole starred in TV’s most successful regional children’s series, THE MAGIC GARDEN (for over 12 years) with her Co-Star, Paula Janis, leading to 3 albums (one Grammy Nominee), hundreds of live family concerts and recent viral posts on Facebook.

From its debut, The Magic Garden, which Demas filmed on her day off from Grease, was a hit. “Kids understood that we were really friends,” Janis said. “It wasn’t just some made-up show with two people who hardly knew each other.” In fact, the show only had a one-page script — the hosts’ banter was mostly spontaneous.

CAROLE DEMAS, who created the role of Sandy, in the original Broadway Production of GREASE, as well as the Title Role in THE BAKER’S WIFE, and created leading roles in numerous other shows, various Soap Operas and primetime TV dramas. She continues (in NYC) to be an extraordinary singer, an engaging speaker with over 60 years in professional theatre. more at www.caroledemas.com

Carole’s wonderful versatility has been seen on camera in principal roles in over 200 commercials for television (everything from men’s cologne to peanut butter and often singing the jingles as well).

Carole played numerous guest star roles on classic prime time TV (including, KOJAK, MANNIX, ROUTE 66, BARNABY JONES, MAN FROM ATLANTIS, FANTASTIC JOURNEY (recently, BLUE BLOODS/CBS and ALLEGIANCE/NBC) and recurring roles on daytime dramas (EDGE OF NIGHT, ONE LIFE TO LIVE, AS THE WORLD TURNS). For the popular PBS Series GREAT PERFORMANCES, Carole joined other stars of the Great White Way for Lorimar’s SHOWSTOPPERS – THE BEST OF BROADWAY. On film, Carole starred in the 300 YEAR WEEKEND, with William Devane and THE SPACE WORKS for Trans-Lux Corp. Other films include appearances in: A LOVELY WAY TO DIE for Universal Films and the recently released THE DISAPPOINTMENTS ROOM

PAULA JANIS traveled widely as a solo musician and folk singer, performing everywhere from Greenwich Village’s Café Wha? to political campaign events at Madison Square Garden. Joining the folk trio, The Wee’Uns, as lead vocalist and musician, she enjoyed appearing on television, at university concerts including Princeton and NYU, and at such famous venues as The Manhattan Center and Carnegie Hall.

As Co-Star of The Magic Garden, the charming children’s show produced by WPIX-TV, New York, Paula combined her two loves, music and education, as part of an award-winning series which continues to delight both young and old to this day.