Come What May: Pop, Hollywood, and Broadway Duets 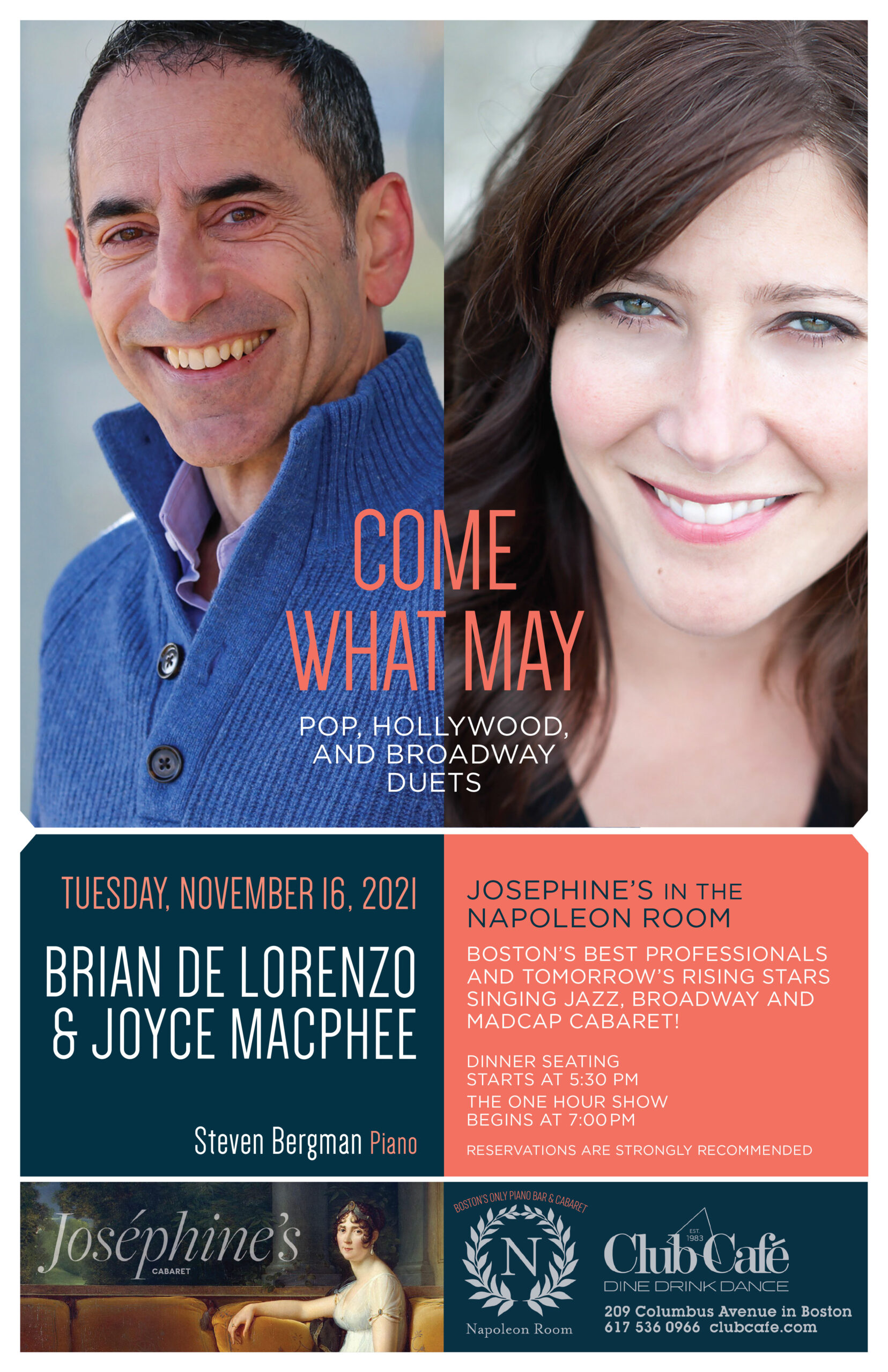 with Steven Bergman on piano.

Selections include songs from Aladdin, Songs for a New World, City of Angels, Moulin Rouge, and more.

Chet Williamson of Worcester Magazine: “When a singer has a voice like Brian De Lorenzo, musicians like to say, ‘He is a songwriter’s best friend.’ He has one of those rare voices that make first-time listeners stop and say, ‘Who is that?’”

De Lorenzo has been nominated three times for the “Best Cabaret Show” Independent Reviewers of New England (IRNE) Award. Beverly Creasey of Cabaret Scenes: “…once in a blue moon you’re at a cabaret and you know something extraordinary is going on. De Lorenzo is at the top of his game.” http://www.briandelorenzo.com

Joyce MacPhee is a member of the band Divas with a Twist, who have been performing sold-out shows throughout the Boston and South Shore area for the past nine years. Of her role as “Tilly” in the World Premiere of Paragon Park, The Musical at Norwell’s Company Theatre, The Sleepless Critic’s Jeanne Denizard said: “Joyce McPhee’s “Long Lost Love” compliments her stunning vocal range and was a crowd favorite.” TalkinBroadway.com: “Especially beautiful [was] Joyce MacPhee’s ‘Christmas Lullaby,’” in a concert of Songs for a New World, music-directed by the composer himself, Jason Robert Brown. Joyce was in the Boston cast of Nunsense I & II playing the role of “Sister Mary Leo.” Favorite roles include “Belle” in Beauty and the Beast and “Peggy Sawyer” in 42nd St. https://divaswithatwist.com

Steven Bergman is an award-winning music director and composer. His musical direction earned an IRNE Award for his work on Spring Awakening (FUDGE Theatre) and a DASH Award for [title of show] (ACME Theatre). He has music-directed productions for Speakeasy Stage, Lyric Stage, New Repertory Theatre, Worcester Foothills Theatre, and many others. He has enjoyed working at many area colleges and universities including Bridgewater State, Brandeis, Dean College and Fitchburg State. Steven has composed scores for musicals including Jack the Ripper, The Curse is Reversed! (about the Red Sox), and a musical adaptation of Orwell’s Animal Farm. https://www.everydayaholiday.net