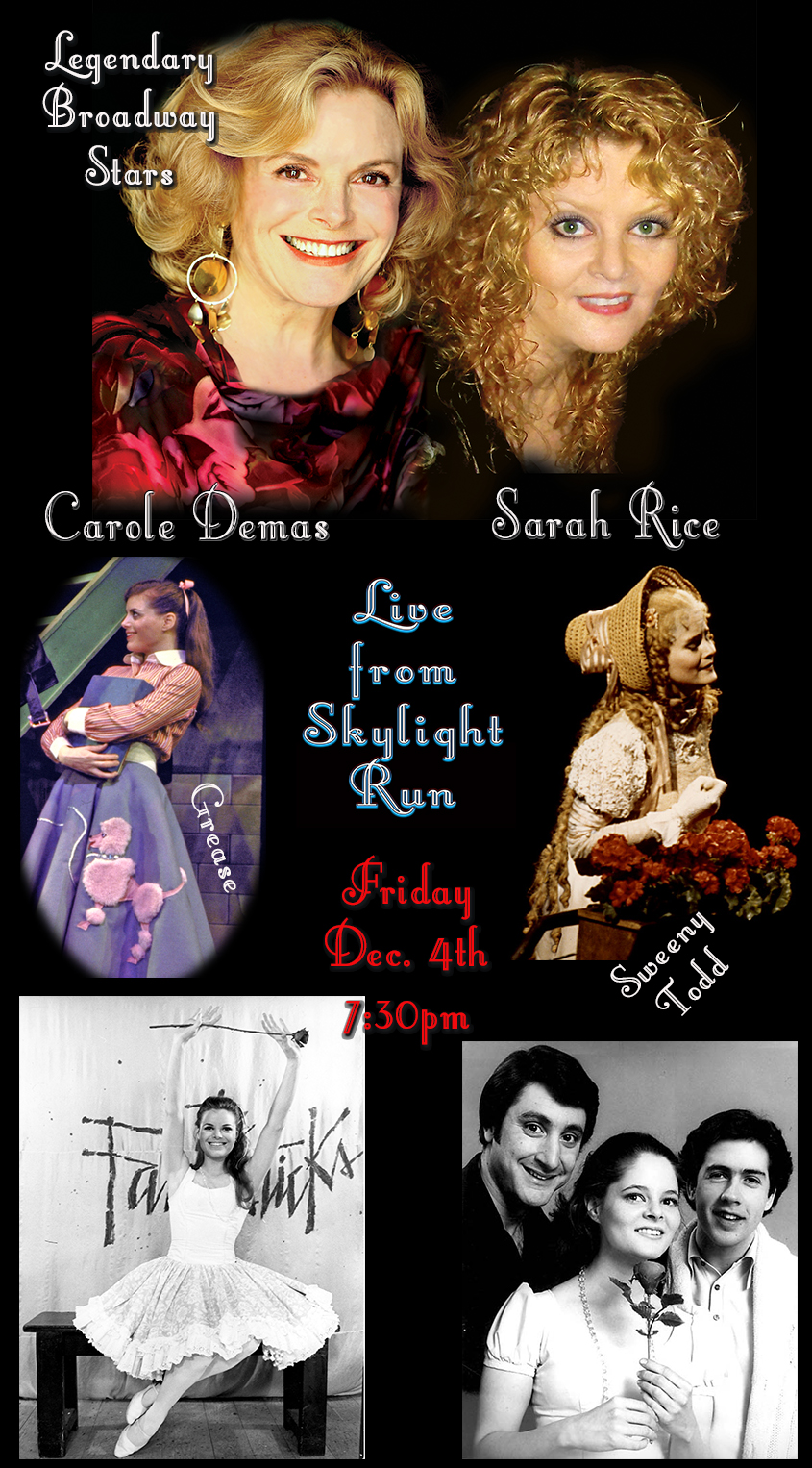 New York- Tuesday, November 24, 2020 – Legendary Broadway stars Carole Demas and Sarah Rice will be taking center stage on Friday, December 4, at 7:30 PM to perform a variety of their favorite songs, when the series “Live From Skylight Run” streams its third concert from Westchester, New York to its growing global audience. With a role in common, having both played the female lead, Luisa, in the original (long running) production of The Fantasticks, these ladies kicked off a lifetime friendship with one another and with Tom Jones and Harvey Schmidt, the creators of the musical. Holding the record for the longest American theatrical run, The Fantasticks is a gem of the American musical theatre and the ladies plan to perform such timeless classics as “Try to Remember” and “Scarborough Fair.”

As this endearing connection continues, Rice and Demas plan on taking the audience on an energetic, nostalgic, and emotional cabaret ride that will surely bring the viewer’s Friday night at home to new musical heights. Rice shares, “We are so excited to be performing together again! We intend to have a blast, as we always do when you put us both in front of a live microphone with a kick-ass musical director and sound engineer!” Skylight Run’s award-winning owner and sound engineer Stuart J. Allyn will be steering the audio with Ian Herman (Broadway credits include “Jelly’s Last Jam”, “The Who’s Tommy”, “Song And Dance”, “Swing”, and “Laughing Room Only” with Jackie Mason) on piano and serving as musical director. Rice and Demas will also perform songs from their tribute to the music of Jones and Schmidt “Thank You for Your Love” which won them a prestigious Bistro Award in 2018.

The buzz is Rice will also be showing-off her unique theremin skills as well as performing Joanna’s “Greenfinch” from Sweeney Todd, a role she originated on Broadway. Other songs the trio will be performing will be “My White Knight” from The Music Man and “A Man and A Woman” from 110 in the Shade. We also hear due to popular demand, Demas will be playing the Kazoo again, as it was a big success during her first concert that launched the Skylight Run series back in September. The audience is invited to round up a kazoo of their own (and their kids) and play along.

As we start to scale-up to the holiday season, which promises to be unlike any other holiday season from the past, the ladies invite you to join them on Friday night, to sit back, grab a glass of wine or a scotch; turn up the volume and sing-along at home, as they entertain you. By the time the hour is coming to a close, you will no doubt be asking yourselves when the next cabaret night from Skylight Run will be. You are in luck, its every month for the foreseeable future! For more info and tickets, please visit: https://www.musae.me/skylightrun/experiences/854/live-from. Tickets are good for the live stream or anytime afterwards.

About Carole Demas: Born in Brooklyn, New York, Broadway veteran Carole Demas holds a B.A. in English from the University of Vermont and continued her studies at the New York University Graduate School of Education. She spent several years as a teacher in the New York City Board of Education System before starting her illustrious career as a leading performer on TV (including 12 years starring in The Magic Garden), Broadway, Off Broadway, Stock and Regional Theater as well as film.
About Sarah Rice: Rice is an American theatre actress known for her work in the Stephen Sondheim productions Sweeney Todd and A Little Night Music, the former of which won her a Theatre World Award in 1979. Rice was born in Okinawa, Japan, while her father was serving in the U.S. Air Force there. Before her first birthday, the family moved to Arizona, where she, a sister, and two brothers grew up. Rice acted in some amateur productions and attended college for one year before she moved to New York at age 18 and began he professional career. The theremin is an electronic musical instrument controlled without physical contact by the thereminist.
About KeyMedia Public Relations: Located in the heart of the West Village, New York City, KeyMedia Public Relations is a results-driven, boutique PR and marketing firm. The company provides a full spectrum of services, ranging from creative and strategic to advisory. The focus is on arts & entertainment, health and wellness, and non-profit.